From the Prison House: Adrienne Rich

In July, 1997, the poet Adrienne Rich sent a letter to the director of America’s National Endowment of the Arts in which she outlined, with subversive cogency, a radical understanding of her craft. Art, “in my own case the art of poetry”, she wrote “means nothing if it simply decorates the dinner table of power that holds it hostage”. In this, she cited the “widening disparities of wealth and power in America” as evidence of a moral and political rot at the heart of the republic. The occasion for such remarks was her recent nomination by President Bill Clinton for the National Medal for the Arts, an award she briskly refused. The “very meaning of art”, she said, “is incompatible with the cynical politics of this administration.” “A president”, she continued, “cannot meaningfully honor certan token artists while the people at large are so dishonored.” A quarter-century later, Rich’s unerring critique of state power, and the position of the arts within a capitalist social order, seems more pertinent than ever; her refusal to whitewash neoliberalism’s “widening disparities of wealth”, likewise, stands out as an exemplary and audacious act.

A self-described “poet of the oppositional imagination”, Rich, who died in 2012, was renowned in her lifetime as an eloquent – and militant – feminist writer, whose focused dissections of patriarchy, and consistent evocation of gendered experiences of pain and longing, opened new modes of poetic understanding. “Underneath my lids another eye has opened”, she wrote in 1971’s “From the Prison House”: “its intent is clarity / it must forget / nothing”. For Rich, art was the conscience of its times: an activity of partisan witness and documentation, bringing “clarity” to the complex fray of contemporary history.

Alongside figures such as Audre Lorde and Alice Walker (with whom she famously chose to share her National Book Award in 1973), and in poems notable as much for their technical assurance as their oratorical power, Rich sought to counteract forms of sexist subjugation and erasure that had rarely been recorded in verse before. Her work involved ‘diving into the wreck’ of America’s social and marital mores to explore the intimate ecologies of female survival, selfhood, and solidarity. “Any woman’s death diminishes me”, she said in 1974. “A thinking woman sleeps with monsters”, she had written in anger and dread some years earlier, in “Snapshots of a Daughter-in-Law”: “The beak that grips her, she becomes.”

Melding fierce ethical alertness with an increasingly expansive formal line and register, her poetry examined the violence and devastations, the hopes and possibilities, of her moment. “I am a woman in the prime of life, with certain powers”, she wrote in 1968, “and those powers severely limited / by authorities whose faces I rarely see”: a succinct expression of Rich’s evolving sense of poetic purpose, but animated, too, by the larger anti-establishmentarian energies gaining force in the period, when anti-war, anti-colonial, and sexual liberation movements, among others, challenged entrenched authority across the globe.

The creatively fructifying nature of Rich’s feminist commitments has long been acknowledged in critical circles. What is sometimes missed in such discussions is that Rich, in honing her literary craft, also engaged deeply with anti-capitalist politics and philosophies, not least with the work of Marx himself. “Sometime around 1980”, she recalled, “I felt impelled to go back [to] what Marx, along the way of his own development, had actually written”:

What kept me going was the sense of being in the company of a great geographer of the human condition; and, specifically, a sense of recognition: how profit-driven economic relations filter into zones of thought and feeling [....] Along with that flare of recognition came profound respect and empathy for Marx's restless vision of human capacities and the nature of their frustration. I found no blueprint for a future utopia, but a skilled diagnosis of skewed and disfigured human relationships.

In attempting to make sense of the manifold, and seemingly ineradicable, exploitations of modernity, at the dawn of the Reagan era Rich chose to return to first principles, studying Marx’s own writings in a spirit of skeptical curiosity. “I found a Marx who would have been revolted by Stalinism”, she observed, and “by the expropriation of his ideas in the name of tyranny[.]”

There’s a humanity and complexity to Rich’s view of the German radical, which many Marxists no doubt would deem heretical. And yet this may be the great value of her interpretation, while also providing a key to the political vitalities that so permeate her poems. As Rich well knew, tyranny (gendered or otherwise) was antithetical to both creativity and democracy. “Like government”, she wrote, “art needs the participation of the many in order not to become the property of a powerful and narrowly self-interested few.” If, for her, poetry and activism were different (albeit sometimes contiguous) modes of human endeavour, they arose from the same impulse: the desire to test and affirm new collectivities of understanding and emotion. “I am thinking how we can use what we have”, she wrote, “to invent what we need”. Or as she put it in the 1977 sequence, “Natural Resources”:

My heart is moved by all I cannot save:

so much has been destroyed

I have to cast my lot with those

who age after age, perversely,

with no extraordinary power,

Like Marx before her, Rich recognised the often brutal dispossessions at the root of industrial and post-imperial society – those events “written in the annals of mankind in letters of blood and fire”, as Marx phrased it – but she also insisted on the capacity of downtrodden communities to forge a new tomorrow, and to thus “reconstitute the world.” The result, in her work, was not only an incendiary understanding of the failures and dangers of capitalism as a system, but also a revitalised vision of Marx’s own legacy and meaning. “How do we create a philosophy of revolution”, she asked, “that itself helps make revolution possible?”

Perhaps as a response to that question, Rich’s searing, luminous elucidations of her own emotional and sexual identity were increasingly accompanied by an urge to map the corroded geographies of late capitalist culture. “I tried to listen to / the public voice of our time”, she noted in 1994, a time “when to feel with a human stranger” had been “declared obsolete.” “Imagine a city where nothing’s / forgiven     your deed adheres / to you like a scar, a tattoo    but almost everything’s / forgotten”, she elaborated in “Rusted Legacy”, conjuring an urban dystopia at once punitive and all-encompassing: “you still / live in that city.” Although her poems are fluent in the dialect of utopian imagining, alive to the potentiality of an alternative society, Rich never flinched from seeing the blasted landscapes and beleaguered cities of late-twentieth-century America for what they were. “I long ago stopped dreaming of pure justice, your honor”, reads one poem, burdened by the sheer weight of the nation: “my crime was to believe we could make cruelty obsolete.”

There was also a consciously internationalist dimension to Rich’s poetry that sat alongside the exploratory, critically nuanced understanding of the USA’s place and development in world history. “The methods of Abu Ghraib and Guantánomo”, she noted in an essay reflecting on the long-term incarceration of the Black Panther Mumia Abu-Jamal, incarcerated in an American prison since 1982, “have long been practiced in the prisons and policing of the United States.” Against the vista of imperial aggression and racist barbarity, at home and abroad, Rich’s work burned with a hard, denunciatory lucidity, and a flickering intuition, always, that another way of life was feasible. “The problem”, she wrote, “is how / to live in a damaged body / in a world where pain is meant to be gagged”, the poem conveying, with final, aching sadness, “how I longed to live on this earth / walking her boundaries     never counting the cost”.

As here, Rich, too, was “a great geographer of the human condition”, making visible the architectures of greed and subjugation that enclose our life-in-common, even as she bore witness to the abiding presence and resourcefulness of those “damaged” by history, whose bodies and dreams, whose subterranean languages of resistance, nevertheless could make the world anew. “A revolutionary poem”, she wrote, “reminds you (for you have known, somehow, all along, maybe lost track) where and when and how you are living and might live – it is a wick of desire.” For radical readers, then and now, Rich keeps the light alive. 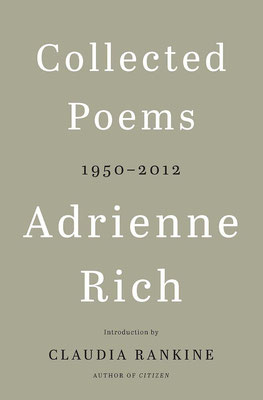 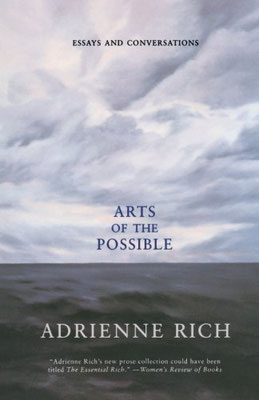 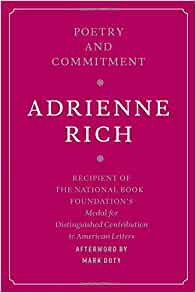 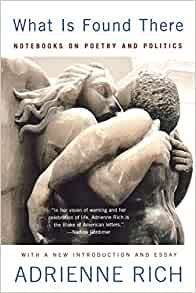