“This is not a time for despair”, says Mike Davis, currently navigating the final stages of terminal cancer, but speaking about the ubiquitous climate crisis: “We’re in the ring, and you have to be ready to go for as many rounds as it takes”. At once pugnacious, declarative, cogent, and inspiring, such advice, in a certain sense, resembles its originator, who has been challenging capitalist and imperialist power systems, analysing their many attendant ills and manifestations, since his early days as a civil rights organiser in the 1960s.

The occasion for such remarks, with their pugilistic zest, was the thirtieth anniversary of the publication of his path-breaking City of Quartz: Excavating the Future in Los Angeles (1990), long regarded as both a classic and an outlier, with its blend of noir-haunted conjuring and granular, sociological exploration of L.A.’s myriad political ecologies. “In Los Angeles there are too many signs of approaching helter-skelter”, Davis writes near the close: “cops are becoming more arrogant and trigger-happy, and a whole generation is being shunted toward some impossible Armageddon”. Within 18 months, the reckoning he had intuited came to pass, when the city erupted in a cataclysmic uprising, sparked by the acquittal of four LAPD officers charged with the use of excessive force during the arrest of Rodney King: a typically brutal incident, but unusual in having been captured on videotape by an onlooker. As chants of “no justice, no peace” echoed through downtown L.A., swathes of the city were reduced to rubble and ash – leading President George H. W. Bush to declare a “federal disaster area” – as protestors exposed and countered a long-standing tradition of police violence with tactics of civil disobedience, arson, and looting. Six weeks after the conflagration, Daryl Gates, the notoriously authoritarian and techno-militarist police chief (accused of instituting a de facto racist law-enforcement regime), resigned his post.

America’s intellectual establishment, meanwhile, shaken from its foggily panoptic perch, began to pay attention to Davis (once viewed as a fatalist, prone to hyperbole, even by fellow radicals), deeming him worthy of a MacArthur Foundation grant in 1998. For this self-described “extreme leftist”, however, such plaudits, and the milieux they emanated from, have generally been treated as distractions from the work, to which he consistently brings a virtuosic analytical rigour, as well as an omnivorous storm of personal passions. What other Marxist scholar has thought to compile a history of the car-bomb, as Davis did in Buda's Wagon (2007), or invested time and energy in writing a trilogy of science fiction novels for young adults, as with his Islands Mysterious series (2003)? Wild originality is one of his hallmarks.

In many respects, Davis’s preferred habitat is in the struggle itself. As he recalls in a recent interview, remembering his time spent “wrapped up in the whole strange world of the New Left Review” in London during the 1980s: “I couldn’t wait to be back to Belfast”, where he lived, intermittently, in the same period. “The real warmth in the British Isles, the real grit”, he adds, with typical disdain for the metropole, “is all in the north of England and Scotland.” As such comments imply, a current of instinctive internationalism runs through his politics, which flicker, brilliantly, with a spirit of pugnacious proletarian rebellion (he was a truck driver for years, and only embarked on his university studies at 29). “Never give up the streets”, he’s been quoted as saying, and it’s a principle that animates much of his writing.

In Prisoners of the American Dream: Politics and Economy in the History of the U.S. Working Class, the scope of inquiry is expansive and thorough-going, but the sympathy that infuses the narrative, as it were, belongs firmly with the workers themselves. “The harnessing of industrial unionism to renovate the vote-gathering machinery of the Democratic Party” in the New Deal era, Davis observes, with a kind of cantankerous clarity, “was an effective instrumental relationship in one direction only”, benefitting the “quasi-aristocratic” Franklin Delano Roosevelt and the interests he served, rather than union memberships. Later – in a conclusion that may hold added resonance in the aftermath of Bernie Sanders’s presidential runs in 2016 and 2020 – his analysis is similarly unsparing of Jesse Jackson’s campaigns for higher office (in 1984 and 1988). The “ascendancy of electoralism on the left”, he finds, “far from being an expression of new popular energies or mobilizations, was, on the contrary, a symptom of the decline of the social movements of the 1960s”. As in his political memoir, Set the Night on Fire: L.A. in the 1960s (co-written with Jon Wiener), for Davis, such mass movements are the energy-efficient locomotives of historical progress, assembled and sustained from the grassroots up.

His memories of “The Troubles” in Northern Ireland are characteristically grounded, and often funny. As one of only a handful of non-Northerners in Belfast at the time, he says,

I felt like we were existentialists in the French Resistance. Because my friends faced extraordinary risk and really didn’t worry about it too much. And I became just addicted to that, the staying up all night… we stayed up every night, drunk, eating soda bread. You know, playing the guitar, telling stories, slagging and being slagged.

In its vivid (and rambunctious) sense of camaraderie and life-in-motion, this reminiscence could belong to a revolutionary conspirator of 1848 or 1798, rather than an eye-witness to the drab and harsh war-zone of Ulster in the 1980s. As one headline puts it, Davis is nothing if not a “damn good storyteller”. For all the fierce clear-sightedness of his research, he frequently comes across as something of a romantic and insurrectionist in the nineteenth-century mode. It seems apt that his deep-delving essays in social and climactic investigation, collected in Old Gods, New Enigmas (2018), should reference anarchist geographers Elisée Reclus and Peter Kropotkin, and on the basis (in his words) that “only a return to explicitly utopian thinking can clarify the minimal conditions for the preservation of human solidarity in the face of convergent planetary crises” – as the twenty-first century advances, and its perils become more pronounced.

This dynamic balancing act, attempting an honest assessment of existing conditions alongside a larger effort at “explicitly utopian thinking”, is a signature feature of Davis’s work. It may be superfluous to note that he refuses to shirk from the difficulties and dispiriting necessities involved. “There is nothing in the catalogue of Victorian misery, as narrated by Dickens, Zola, or Gorky”, he asserts in Late Victorian Holocausts: El Niño Famines and the Making of the Third World, “that doesn’t exist somewhere in a Third World city today”. “Famines are wars over the right to existence”, he likewise writes, excoriating economic and diplomatic policy-makers who “build definitional firewalls between malnutrition and famine, poverty and starvation”, consolidating a “semantics” of global development that renders “‘ordinary’ rural poverty invisible” and mystifies “the chronic malnutrition responsible for half of the infant mortality on the planet”. As ever, Davis’s disciplined insight and combustible fury are deployed in strategic unison, and in favour of the officially “invisible” masses, the so-called ‘wretched of the earth’, whose agency (and persistent knack for survival under circumstances of long-term duress) he recognises as a transformative force, in increasingly traumatic times.

Very “poor people”, he observes in Planet of Slums, “have little choice but to live with disaster”, a fact also acknowledged, and partly transmogrified, in Old Gods, New Enigmas. As urban populations face an unprecedented cascade of environmental and social emergencies, he says, “I propose the city as its own possible solution”:

We must transform private into public affluence with a zero-carbon footprint. There is no planetary shortage of ‘carrying capacity’ if we are willing to make democratic public space, rather than modular, private consumption, the engine of sustainable equality.

For Davis, to “raise our imaginations to the challenge of the Anthropocene” is both a material challenge and a fierce ethical imperative, requiring us “to dream old dreams anew”.

Attuned to the lurid nightmares and the spectral potentialities of present history, Davis, as we’ve seen, has proven prescient in anticipating and clarifying the malaises of our modern age (sometimes in the most literal sense). Recently, his essay, The Monster at Our Door: The Global Threat of Avian Flu, has won renewed attention and acclaim. In it, he detects a sickness at the heart of capitalist agricultural production, its vast supply-chains and increasingly disruptive methods of accumulation, he suggests, almost guaranteed to produce (and spread) new viral diseases on an unprecedented scale. First published in 2005, it was only a matter of time, once more, before Davis’s assessment was vindicated, as the Covid-19 pandemic, in 2020, overwhelmed the world’s social and commercial infrastructures, consuming millions of lives as populations fell victim not just to the virus itself, but to a global order oriented around trade and market needs, rather than public health.

As a political diagnostician, Davis has combined an incendiary hatred of domination with an incisive skepticism of prevailing cultural narratives (e.g. that ‘everything is going to be alright’, of its own accord). But there is also a classical robustness to his materialism. More than most contemporary radicals even, Davis seems to have a gift for absorbing the most vital elements of the traditions he draws upon, before bringing them to bear on present-day concerns. His thesis above, for instance, serves, among other things, as a concise exegesis of Marx’s idea that “Capitalist production [...] develops technology, and the combining together of various processes into a social whole, only by sapping the original sources of all wealth — the soil and the labourer.” For both writers, as elaborated in their respective works, the doctrine of endless economic growth exists in practice, and can only continue, by way of exploitation and ecological rupture, depleting the very resources (human and natural) on which it depends. Imperilling its own mythos of unassailable longevity, a capitalist system of production (including agricultural production), tends to destroy the earth it conquers, and the people it claims to serve.

Davis’s vision, however, has been a sustaining one. “In writing about the West”, he has said, with anti-Ozymandian perception, “I was writing about precarity of the west. Wests come and go — there’s gold, there’s silver, there’s a railroad, there’s nothing stable, everything vanishes and reappears, the biggest towns in the state become ghost towns.” Power, he argues, is fickle and volatile, but also inherently vulnerable to decay, morally and at the level of environmental process: “this is part of this new catastrophist understanding of history that I’ve been trying to grapple with for decades.”

On first glance, it seems a mark of the depth and tenacity of Davis’s opposition to the architectures of injustice that such a “catastrophist understanding of history”, for him, could be a galvanising one. But so it should be: a means of seeing our shared (ultimately precarious) life-in-the-world more clearly, and an aid to battling against its excesses and inequalities. “I don’t think you need rations of hope”, he reminds us, “What you need is a deep commitment to resistance and a fighting spirit and anger.” Three cheers to that – and to the rebel himself, whose words and “fighting spirit” have done so much to keep the flame alive. 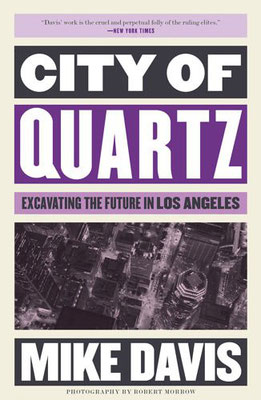 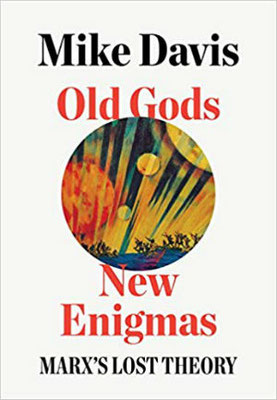 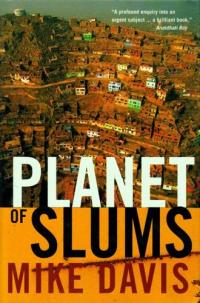 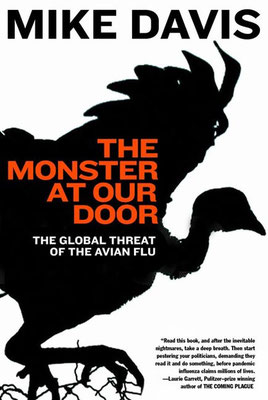